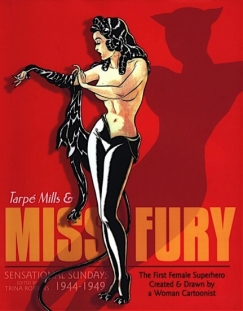 DC DIRECT, THE MERCHANDIZING ARM of publisher DC Comics, produces a line of collectible busts called "Heroes of the DC Universe." Apparently, the category of "Heroes" includes not only classic superheroes such as Batman, the Flash, and Green Arrow but also villains like the Joker, Darkseid, and Larfleeze the Orange Lantern. Flip a few dozen pages farther through the DC Direct catalog, though, and you come to a separate line of statues called "Women of the DC Universe"; this is where you'll find busts of Wonder Woman, Catwoman, Supergirl, Vixen, and other female members of DC's vast cast of superpowered beings. In other words, "heroes" are defined as men, including mass murderers, while women are what they are.

I've a hunch that whoever in the DC marketing department created these two discrete product lines was working on a notion that separating out the ladies was some kind of honorific, a pedestal to show off their unique skills and forms. But it's a glittering example of the problematic position of female superheroes, who are usually created and written by men for a largely male audience, while also often serving as models of female power and independence. Even the fact that we routinely call them "female superheroes" more often than "superheroines" or just "superheroes," reflects the issue; like girl bands and lady judges, the "female" in "female superheroes" is still a modifier to the real thing.

DC's leading lady is, of course, Wonder Woman, a warrior princess born of an all-woman Amazon civilization created by the gods. She first appeared in December 1941; her real-life male creator, William Moulton Marston, invented the polygraph machine and was an enthusiastic scholar of the psychology of bondage. Combining his interests, he granted Wonder Woman a Lasso of Truth that forces honesty out of those it ensnares. Needless to say, there is no limit to the interpretations that comics fans and analysts have lent to this complicated origin of the superpowered female, which is both wildly progressive and disturbingly fetishistic. That this contradiction burdens female superheroes 70 years later isn't as surprising as it should be.

But, contrary to common belief, Wonder Woman was not the first female superhero. She was preceded by more than half a year by Miss Fury, who starred in her own Sunday comic strip for 10 years beginning in April 1941. Miss Fury was created, written, and drawn by a woman, June Tarpé Mills, who published under the more sexually ambiguous Tarpé Mills. Had Miss Fury entered an enduring canon like DC's, it's possible that the template for female superheroes, as well as for superhero comic readership, would have depended more on the influence and perspective of actual women.

Has anyone read this collection? What did you think of it?
The Backup Ribbon Project is back on!

Not sure if anyone here goes to Defcon (hacker conference), but if you are going, or know anyone going (particularly ladies), might want to check out this: http://singlevoice.net/2012/07/12/sexism-redyellow-cards-at-defcon/
Collapse